Nova is a delightful little lady who we care very much about. The first year, Nova lived with a feed host, but she came back to us just before Christmas 2017. What we can say about Nova in work is that she is a natural talent in the track, she is methodical and concentrated. In protection work she blossoms and she loves to “take the fight” with the helper. She can take a lot of load and brings out her best “damn mom” when the helper puts the load on, you can see how much fun she finds it and it’s a joy to practice protection with her. She can sort nicely and listens well even though she picks up a good drive, of all the things we have trained, it is probably in the shelter that she shines the most. In obedience, she is complicated as she somehow comes across as too smart. She analyzes everything and then decides herself when things should be done. When she learns a moment/command, she never forgets it. But the difficulty lies in her analyzing and that she doesn’t really have the so-called “will to please” that makes a dog easier to work with. If she doesn’t want something, she simply sucks at it, and then it doesn’t matter what reward she is offered or if you order her to do something. If you take a stand against her, she turns completely sonic on the “heel” and says: Do it yourself if you think it’s so important.

Inside, she is so calm and quiet that you hardly notice her, she loves to snuggle with us but can also go to bed in the strangest places. A favorite place has become inside a wardrobe…so yes, we have prepared it so that she can lie comfortably in there when she wants to. She is a very funny dog ​​who goes her own way.

Nova is x-rayed with free hips and elbows, just like her two brothers. Her back is also checked by x-ray and judged to be free (unofficial result because we do not have official readings of backs in Sweden yet). Furthermore, she has done a very nice MH and perhaps an even nicer MT where she was approved with 454 points and thus ends up among the highest points for a bitch of the white shepherd dog breed in Sweden. Nova has participated in 8 shows and an exterior description and that was all it took for her to become Swedish show champion. Nova has gotten her eyes and DNA tested and had her first litter in January 2021, when she was 4 years and 3 months old. Now that litter will be evaluated and then we will make a decision if she will be used for another litter, provided that we find the right partner and that she continues to be as healthy and beautiful as she is. Nova has never been sick, she has had a broken claw on a back paw on one occasion and was falsely pregnant once. In addition to this, she has only been to the vet to get her vaccinations, her X-ray examination and her eye examination. 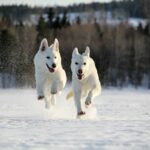 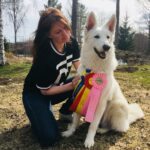 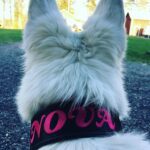 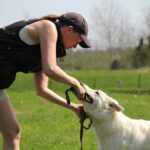 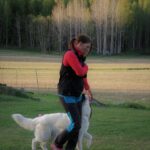 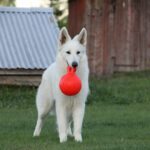 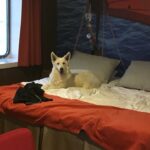 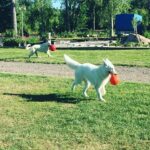 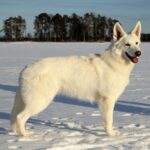