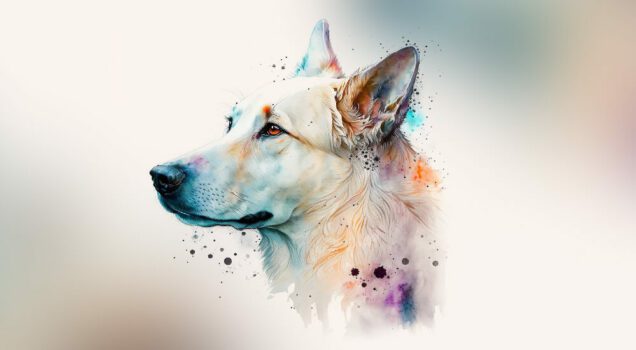 My thoughts about breeding – part 2

1 year ago by Linda

One of my favorite quotes is “ cogito , ergo sum ” or as it was called before it was translated into Latin; “Je pense , donc je suis “. In the French philosopher René Descartes’ attempt to reject all that was not fully verified knowledge, he ended up saying that all he could know for sure was that a thought required a thinker, and since he had thoughts, he could say with certainty that he existed. I think, therefore I exist.

A bit far-fetched, one might think, and naturally ask the question – what on earth does this have to do with breeding? Nothing or everything, one could answer that question. This post about breeding is about the difference between fact and belief. If we discard everything we believe in and concentrate only on the facts, what will it look like?

Claim: If there is a 0.0% inbreeding rate in the pedigree, the dogs are unrelated.

No, this is not necessarily true. On SKK ‘s website it says: “The degree of inbreeding indicates how much of the offspring’s genes have been duplicated through the parents’ kinship, calculated over a certain number of generations.” And by a certain number of generations, SKK means 5 generations. Furthermore, it says: “If a dog with a high degree of inbreeding is mated with a completely unrelated individual, the inbreeding is broken and the offspring gets 0% inbreeding degree.” It is true, if you only calculate this probability for 5 generations and assume that the dogs beyond these 5 generations are unrelated. I use the word “probability” deliberately because this calculation of inheritance is a probability calculation. Anyone who wants to read more about it can read Dr. Sewall Wright’s thesis that was published in 1922. So what we use today is a probability system that has existed for 100 years.

Statement: Line breeding and inbreeding are not the same thing.

It’s wrong. At least if you look at it purely genetically. In both line breeding and inbreeding, related individuals are paired. There are those who claim that line breeding is a conscious act and that inbreeding is an unconscious act, or a more populist expression is that those who inbreed do not know what they are doing while those who line breed know exactly what they are doing. Those who use the expression line breeding do so to justify an inbreeding where you are looking to strengthen a certain characteristic. I myself have fallen into that trap when the pressure to have as good a hip joint index as possible was at its greatest, when I “line bred” a bitch whose inheritance of hips was confirmed to be extraordinary. If I succeeded? Yes, you can say that because 100% of the litter of 9 puppies has been evaluated and all have free hips. If I am happy with my decision? No, not anymore. I was when the hip results came in, but since then I’ve learned more. Of course I love the puppies and am proud of them, but these are feelings that I have. Facts are different. I’m constantly learning new things and even though I stand by what I’ve done, I don’t necessarily cling to old truths. I inbred to strengthen a trait at the expense of genetic variation. It is fact.

This statement is loaded with so much emotion that it is comparable to saying that you love ethnic cleansing. If we put the emotions in the fridge for a little while and consider what facts there are around this, where do we end up? Breed is a classification of individuals within an animal species into groups characterized by specific common hereditary characteristics, yet able to reproduce with individuals from other breeds. Based on different countries’ approval of different breeds, it is true that the White German shepherd and the White Swiss Shepherd are two completely different breeds, because it says so on their pedigrees, and also there are different things in the two different breed standards that define what a breed should look like.

Pedigrees are a document drawn up to verify an origin or as SKK describes it: “It is like a family tree where you can see the puppy’s mother and grandparents and the family further back in time. The pedigree on the registration certificate contains 3 generations.”

Breed Standard is a document that establishes the ideal of exterior of an animal of a breed. In other words, how it is supposed to look like.

The claim that White German Shepherds and White Swiss Shepherds are two completely different breeds is therefore based on documents drawn up by different organizations. But is it fact from a genetic perspective? No, it’s not. Not according to one of the market’s leading DNA-companies which, with the help of modern technology, can sequence 200,000 unique genetic sequences in the dogs’ genetic mass and still have not been able to find the difference between a White German Shepherd and a White Swiss Shepherd. Based on modern technology, it cannot therefore be claimed that there are two different breeds today.
Or as the Genetics Board puts it: “In order for heredity to work at all, the information contained in DNA must be copied. Every time a cell divides, all the DNA in the cell is copied. In this way, all cells, including the germ cells that give rise to a new individual, have the same information.” In other words, no matter what we write on a document, or how carefully we calculate the probability of inheritance of alleles, there is no research today that I have been able to find that suggests that inheritance changes if we rename it, nor have I been able to find any research that states that this copying of cells only occurs in a certain number of generations, determined by an organization.

A Dog Leukocyte Antigen (DLA) gene, DRB1 encodes a major histocompatibility complex (MHC) protein involved in the immune response. Some studies have shown associations between certain DRB1 haplotypes and autoimmune diseases such as Addison’s disease (hypoadrenocorticism) in certain dog breeds, but these findings have yet to be scientifically validated. DQA1 and DQB1 are two tightly linked DLA genes that code for MHC proteins involved in the immune response. A number of studies have shown correlations of DQA-DQB1 haplotypes and certain autoimmune diseases; however, these have not yet been scientifically validated.

Thus, it is not yet scientifically confirmed that the absence of genetic variation in DRB1, DQA1 and DQB1 could cause autoimmune diseases, although several studies have made that connection.

So can we say with 100% certainty that one is sicker than the other at the moment? No, we can’t. Can we say that the research suggests that high genetic variation is beneficial within a population? Yes, we can. The Genetics Committee can summarize it with the following words: “Genetic variation is the basis for evolution and adaptation. If all individuals within a species or population are genetically similar, all individuals will be sensitive to the same changes in the environment. A new virus or a warmer climate would then hit the whole group hard. With a higher degree of genetic variation, the chance increases that some individuals have precisely the characteristics required to adapt to a changed habitat. It is therefore a kind of insurance for the survival of the species, or the population. Mutations, sexual reproduction and the fact that there is a genetic exchange between populations lead to a higher genetic variation. Factors that, on the other hand, reduce genetic variation are genetic drift, bottleneck and founder effects.”
I have chosen to publish my thoughts on breeding here on my website. I choose seldom to debate on social media because I don’t find it particularly interesting to respond to the “I’ve heard that” or “everyone knows that” science which often ends with “then you can get another breed then” and an astonishing number of exclamation points. In other words, what I write can stir up other people’s feelings, regardless of whether I write about breeding in general or about a specific breed. And as I wrote in Part 1 of My Thoughts on Breeding so no, I’m not against purebred dogs, I want us to have different breeds but I don’t necessarily want us to continue to make decisions based on a 100 year probability calculation and see it as the only true doctrine. There may be other ways.

I am attaching a number of links (in swedish) that may be of interest, but as usual I urge you to search for research and scientific articles yourself in the true spirit of Descartes: I think, therefore I exist.